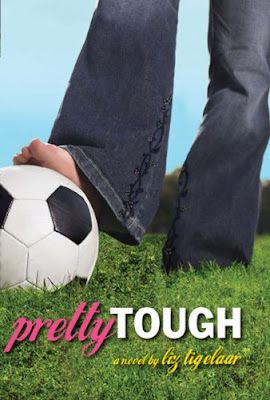 okay so i must admit i read playing with the boys first and loved it before i knew this was the first one but lemme tell you it doesn't matter which order you read these books in because they are emotional impact books and i know that sound like some crazy books that health teachers would make you read but these "Pretty Tough" books are influencing girls to forget about the emotional crap you have play sport and forget the guys even if it is only for one day/week like Brooks.

so this story starts off with Krista being captain of a soccer team and its her senior year and now the coach got fired and they replaced her with someone who doesn't know a thing about soccer, Martie. Krista doesn't like her and she begins to start hating her when she asks her younger sister,Charlie, and a bunch of losers from other schools to first of all go to school and then play in the team! to top that off her long time secret charming boyfriend is sick of hanging around and either want to skip a few levels or be gone. well thats Krista's side it sounds like hell doesn't it.

Charlies side is that her sister is perfect and she has always been downgraded as the less sportier, the less prettier she just wasn't perfect in anyone's eyes except for Martie. Martie didn't ask her to be on the team she pratically forced her to be on the team and then "encouraged" other girls to play as well. although she making friends with these girls, she cant help but feel out of place especially when her older sisters on the team but lifes not all about sport and parties. Charlie is a "troublemaker" in all departments. teachers hate her, she has currently no friend ss because of a stupid rumor and has caught the eye of reporters and guys from all of California. Lifes about to get bumpy if not bumpier.

so this story is about two sisters that hate  each other but are forced to play a team sport together and work things out. it might have taken Hell Month but it looks like its getting better.

Hugs and Wishes
Candi
Posted by Unknown at 10:53