Okay so  I have been busy reading tonnes of books so I whipped through the XVI series and Temptation of Angels. Yes i know all of you had voted for darkness before dawn but that one was due back at the library so i was forced to read it. so obviously I have 3 reviews to do today. so i will start with temptation of angels.

temptation of angels by Michelle Zink:

so this is one i had high expectations from since Michelle Zink's prophecy of the sister trilogy was fantastic. i really loved it! but this one was a slow starting and rushed end. i think she dwelled a bit too much in the problem and the other complications surrounding her. but otherwise the story was good. it has a love triangle with the main character Helen (they always seem to go with Greek mythology names) and Raum, a childhood friend and Griffin. so the story starts off with her parents getting killed by assassins and sending her down a tunnel that comes out at one the places she was always with her parents. she eventually finds her way to griffin and Darius's house. after that things get complicated. she learns what she and others are which is part of a group called the Enlightenment. then she meets raum again. he tells her information which leads them to Alastor and evil demon seeking for power against the human world. in the end Helen has to pick between Raum and griffin, with another major factor/problem hanging over her head. the one thing i really don't get about this book is why its called temptation of angels. there's demon in it an there's the Enlightenment but there is not really any mention of angels which is kind of what i was looking forward too. all the fallen angels battling each other with Helen stuck in the middle. oh well we cant all get what we expected for.

XVI and Truth by Julia Karr: 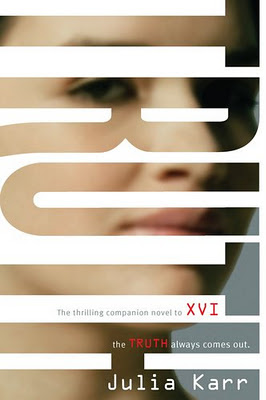 so these two were interesting i actually had to read XVI again so that i understood the story but this is an amazing series. i here people say "oh its just another one of those government dystopian series like the hunger games and the declaration" but its not that's something people say when they haven't read these books. this a heart breaking falling in love story that i cant wait for the 3rd one to come out and i love the in between blog Julia's writing about Nina's life while she finishes the third one its called the xvi series. so xvi is all about Nina having a normal life meeting a guy called Sal and her life turning up side down first of all with her mom being forced to die that night as a criminal, then learning her dead father is still alive then moving back to Chicago to live with her grandparents and trying to stay away from ed (her little sisters father?). after one night of music, threats and walking Nina ends up finding out a lot more about her life and is falling in love with Sal.
Truth is all about well truths and lies. Nina suspects Sal is lying to hr and doesn't really love him. while her grandpa is arrested for a lie and her gran then has a heart attack and is put in hospital. Nina also finds the truth out about FeLS (which is an institution in the book) and what happened to Joan (mikes sister) but while Sal has disappeared she starts to fall for her best friends brother, Chris. while things go on Nina joins the sisterhood which is a bunch of female creative non cons who want to do more than sit around so they broad cast truths about the Media and the government. at the end something disastrous happens and would like to not tell you.

Any way that's all from me today.


Hugs and Wishes
Candi
Posted by Unknown at 21:00