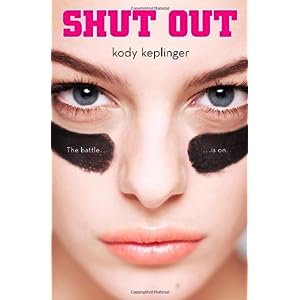 this book i have waited a long time for and now it has arrived on my doorstep and within three hours i have finished it. YES!! new record! anyways Shut Out is by Kody Keplinger an author notoriously known for rewriting some really boring classics (sorry if you like classics) and putting a romantic funny twist on them for instance in shut out Kody has rewritten Lysteria a classic about women having a sex strike to stop a war.

so in shut out, Lissa is Randy's girlfriend and she is sick of coming second to a team of soccer players so she gets all the football girlfriends and her best friend (happens to be school slut) and the girlfriend of the soccer teams captain in one room on one table and she declares a sex strike. This particular sex strike included no sex, no hand jobs, no bj's, no kissing and anything else that the guys liked until they settled this ten year rivalry. everything changed when it actually worked and all the girls were proud of themselves. it really would have lasted longer if Lissa's daydreamer wasn't the leader of the guys side and when the guys started to play cannon ball half naked all girls didn't know what they were doing? did they give up the strike or did they continue like brave soldiers it would depend on whether or not Lissa was going to allow it.

this book is an amazing retell funny, yet heartbreaking and a great chick lit because it proves just how dumb teenage guys ( and older males) really are. if you went on a sex strike with your guy how would he act?

Hugs and Wishes
Candi
Posted by Unknown at 16:06