Okay so I have had 2 weeks off holiday a week to catch up on homework and now I'm back with 2 reviews on one of the debut authors of the year Kady Cross's books The Girl in The Steel Corset and The Girl in Th Clockwork Collar. Both amazing books by an amazing author.
First of all, steampunk is a new hit rating genre that every one is catching onto its either going forwards in time to the future where there are 400 different realms like The Mortal instruments or going back in time where the all dress weirdly but having greater known technology than today like The infernal devices or The steampunk chronicles.

Okay so The Girl In The Steel Corset is No#1 but before that was the prequella that was an eBook originally but has now been printed just before The Girl In The Steel Corset called The Strange Case of Finley Jane  personally the first 100 pages(there was only 101) of the prequella sucked it really wasn't interesting at all until it ended and got onto the real story, it almost made me want to stop reading and that's all I have to say about that book.
So The Girl In The Steel Corset is about how Finley Jane is pressured by her master of the house and then knocks him out and ends up finding her way into Griffin King's mansion living as a guest like most of his housemates but together they all possess something unusual about them. Emily is a medical genius and can talk to machines, Sam is made of metal now but is still as big and brute as before, Griffin can possess some Aether energy and connect with others through it, Jasper has the ability to move as fast as he wants when he wants and knows how to fight too. Finley, however, has a dark side that knows how to kill. So while they are trying to connect Finley's dark side with her light side an evil mastermind that calls himself the Machinist starts to destroy the world and wreck the group apart. 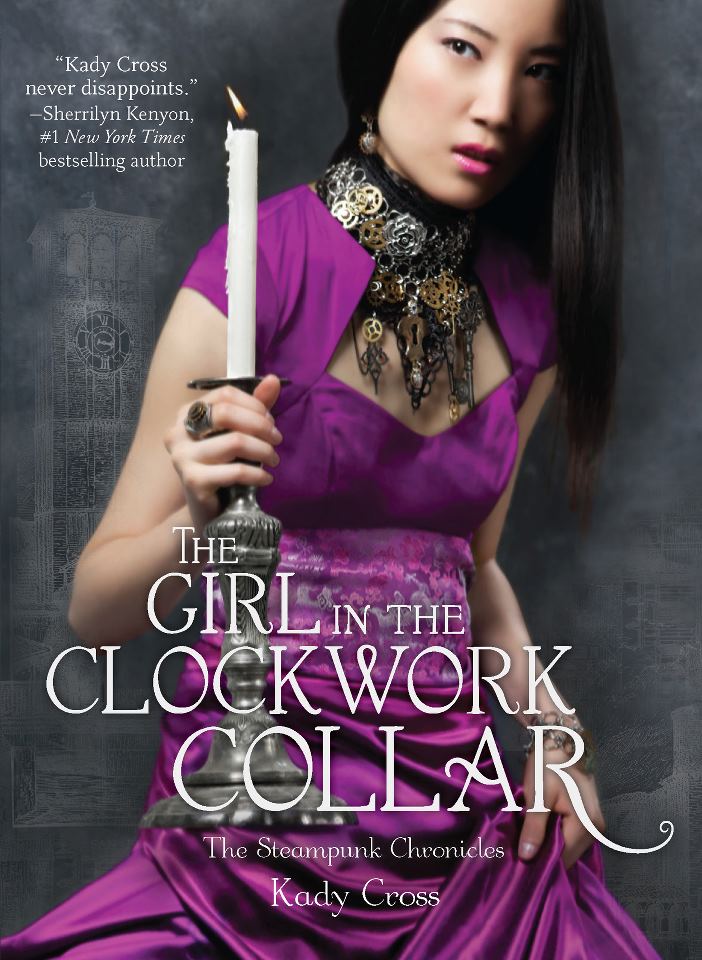 In The Girl In The Clockwork Collar (second book) we go to America because Jasper's been arrested for murder that are so sure he didn't commit but when they find out he wasn't taken to prison but to an old nasty friend, Dalton's, house. Finley and Emily go in and do some recon getting Dalton to turn his attention to her whilst Sam and Griffin come up with an almost exact copy of Finley plans as well but Griffin's and Sam's doesn't turn out as well. Finley gets asked to go and live with Dalton and Griffin is not sure that's a great idea but Finley goes anyway. When she's in there she meets the mysterious Mei that has put Jasper in all this trouble and suspects there is something else going on but doesn't have time to uncover that secret because she is supposed to be tailing Jasper. Jasper is putting a gadget back together after he took apart 3 years ago against his will thinking he is saving his love of his life Mei.

So that's the two books from the steampunk chronicles by Kady Cross. they are amazing for everyone nobody would want to put them down.

Hugs and Wishes
Candi
Posted by Unknown at 17:09